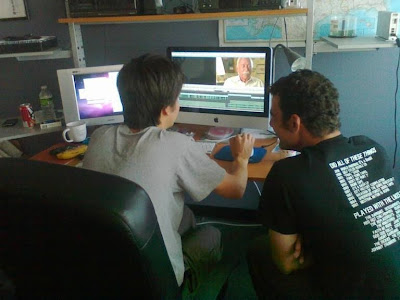 Early this morning in the studio, we completed the last phase of the movie before the final technical fixes of image and sound, which will occupy much of the next week or so. We brought in the excellent musical score by Lonnie Montaquilla and Ben Mesiti. Here are Dave and Lonnie, right, doing some fine-tuning.

The sound is beautiful, to match the quality of the high-def images.

TICKETS FOR BOTH PREMIERES NOW ON SALE

BEHIND THE HEDGEROW OPENS
R. I. INTERNATIONAL FILM FESTIVAL

PROVIDENCE, R.I. –– Tickets are now on sale for the World and Newport premieres of BEHIND THE HEDGEROW: Eileen Slocum and the Meaning of Newport Society, the exclusive and first-ever movie about the secret world of old-money aristocratic Newport and one of its -- and Rhode Island’s and America’s -- most prominent families.

Both premieres, which are presented by the 2010 FLICKERS: Rhode Island International Film Festival, will be followed by gala parties. Admission to these parties is included in the ticket price.

The World Premiere will be 7 p.m., Tuesday, Aug. 10, at the VMA Arts & Cultural Center, 1 Avenue of the Arts, Providence, R.I., 02903. This screening is the feature event of the opening night of the FLICKERS: Rhode Island International Film Festival. Tickets are $25, including the post-screening soirée.

The Newport premiere will be 2 p.m Aug. 14 at Bazarsky Hall, O’Hare Academic Center, Salve Regina University, Newport. Tickets are $30, including a post-screening High Tea hosted by members of the late Eileen Gillespie Slocum’s family on the grounds of Slocum’s Bellevue Avenue estate.

Online ticketing for both events is available at the Film festival site or through the film site. Phone orders can be placed at 401-861-4445 or in person at the FLICKERS/RIIFF office, 83 Park Street, Suite, 1, Providence, RI 02903. Tickets will be sold at the doors but seating is limited, and advance orders are recommended.

Part history, part contemporary look, BEHIND THE HEDGEROW is told through the focus of Slocum, Newport’s last grand dame, who died in the summer of 2008. Slocum’s family has granted the filmmakers exclusive access to her archives and private Bellevue Avenue estate, where much of the film was shot over the last year.

The film features the on-camera appearances of several members of Newport Society, many of whom have never appeared on the screen before. The film is narrated by the late Eileen Slocum herself, through audio recordings made before her death.

Slocum was not only Newport’s last grand dame –– she was a leading national Republican political figure for many years, a friend of both Presidents Bush, Presidents Reagan and Ford, and many others on both sides of the political spectrum. She was a descendant of prominent Rhode Islanders, including Roger Williams and the Browns of Brown University. These stories are told in the film in Eileen’s own words and appearances by several friends, including former Governor Bruce Sundlun and Hugh D. “Yusha” Auchincloss, stepbrother of Jacqueline Kennedy Onassis.

BEHIND THE HEDGEROW is the second title from Eagle Peak Media, the production company founded in 2008 by writer/producer G. Wayne Miller and director David Bettencourt. ON THE LAKE: Life and Love in a Distant Place, its first title, premiered in February 2009 to critical acclaim. PBS broadcasts in major national markets began in March 2009 and continue today. ON THE LAKE was nominated for an Emmy by the New England chapter of the National Academy of Television Arts & Sciences.

George T. Marshall, RIIFF Executive Director, is the executive producer of BEHIND THE HEDGEROW.

THE FLICKERS’ BACKSTORY & MISSION:
The mission of the Flickers, the Newport Film Society & Arts Collaborative - now in its 29th year - has been to serve as a creative partner in the arts by uniting various media and arts disciplines that nurture the artistic process and support a vital part of our community. This includes multi-disciplinary art presentations; artistic and cultural activities; performance festivals; video and television productions; audio recordings and broadcasts; educational outreach programs; and the FLICKERS: Rhode Island International Film Festival (RIIFF).

ABOUT RHODE ISLAND INTERNATIONAL FILM FESTIVAL:
The FLICKERS: Rhode Island International Film Festival (RIIFF), has secured its place in the global community as the portal for the best in international independent cinema, earning the respect of domestic and foreign filmmakers, filmgoers and trend watchers. This confluence of art and commerce brought together world-class celebrities, award-winning filmmakers, new talent and audience members in record numbers last year. Ranked as one of the top 12 Festivals in the United States, RIIFF is also a qualifying festival for the Short Film Academy Award through its affiliation with the Academy of Motion Picture Arts & Sciences. There are 65 film festivals worldwide which share this distinction and RIIFF is the only festival in New England. The next Festival will take place August 10-15, 2010. For more information about the festival, please visit the Film festival site.
Posted by G. Wayne Miller at 12:36 PM No comments:

Soft light on an evening on Bellevue Avenue... 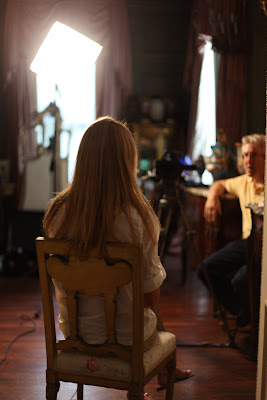 Yes, we really did return to Eileen's mansion for one last shoot, the evening of Tuesday, June 29. We had some additional scans provided to us by Eileen's daughter Beryl Slocum Powell, which production assistant Brenda Rourke handles; a sound-recording of Patricia Painter, the diarist voice of Eileen, which musician/soundman Lonnie Montaquila oversaw; and an on-camera interview of granddaughter Phyllis Trevor Higgerson, which Dave and I conducted. That's Phyllis, back to camera, and me in the distance, in this photo by Dave.
Phyliss beautifully narrated an important era in her grandmother's life: her coming of age in 1930s New York City society; her engagement to richest-bachelor-in-the-world John Jacob Astor VI, whose mother was pregnant when she survived the sinking of the Titanic (the second Titanic story in the film, by the way); and the eventual meeting and marriage of Eileen and her husband John.
Posted by G. Wayne Miller at 1:02 PM No comments: