Newport Now is among the mainstream publications that are beginning to pay attention to our film. Newport Now published a piece in the June 30 online edition.

Among the other recent publicity:

The Warwick Beacon ran a story in the July 2 issue.

The Providence Journal ran a short piece in May.

To watch a quick clip from the show, CLICK HERE. And check back soon for news of sponsor opportunities for your enterprise. be part of a happening thing!
Posted by G. Wayne Miller at 2:11 PM No comments: 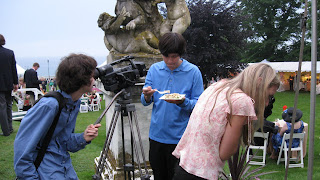 Great shoot last night in Newport. A shot of the crew and this is the press release we issued:

NEWPORT, R.I. –– After weeks of advance work, production begins today on BEHIND THE HEDGEROW, a feature-length documentary about Newport society that will be broadcast on PBS in 2010. A companion book will also be published.

The movie, from filmmakers G. Wayne Miller and David Bettencourt, is an exclusive inside look at the people of fortune and their descendants who have made Newport a coveted address and summer destination since the mid-1800s.

Filming at the Newport Flower Show, courtesy of The Preservation Society of Newport County, host of the show, is the first of several on-location shoots that will bring the filmmakers literally behind the hedgerow –– into the residences and private worlds of Newport’s leading families.

Part history and part contemporary look, BEHIND THE HEDGEROW will utilize rare footage, photographs, archives and on-camera interviews. A significant part of the film will be the story of the late Eileen Gillespie Slocum, whose family has welcomed the filmmakers into the world of their late mother, who died in 2008.

“To our knowledge, no one has ever documented these fascinating people and their city-by-the-sea in a movie,” said Miller. “We are excited to begin.”

BEHIND THE HEDGEROW will premiere at the 2010 Rhode Island International Film Festival. The movie trailer will be shown publicly for the first time in Newport on Aug. 13, 2009, at the Redwood Library, one of the many local and state institutions that is assisting Miller, Bettencourt and their crew with the film.

BEHIND THE HEDGEROW is the second title from Miller and Bettencourt’s non-profit Eagle Peak Media production company. ON THE LAKE, Eagle Peak’s first title, premiered in February to critical acclaim. PBS broadcasts in major national markets began in March and continue today. The DVD has recently been released.

Funding for the film is provided, in part, by a grant from the Rhode Island Council for the Humanities.

Miller, a staff writer at The Providence Journal, authored the 2000 Journal series about Newport society, A Nearly Perfect Summer. Bettencourt’s first feature film was the wildly successful YOU MUST BE THIS TALL: The Story of Rocky Point Park. 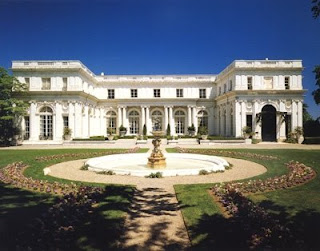 Courtesy of the Preservation Society of Newport County, we will be in Newport this Friday, June 26, from 6 p.m. to 9 p.m., shooting B roll at the Newport Flower Show's evening cocktail party. It's at the fabulous Rosecliff mansion, pictured here. See you there!
Posted by G. Wayne Miller at 6:47 AM No comments: 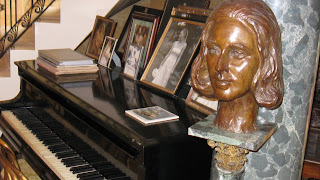 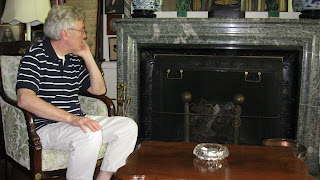 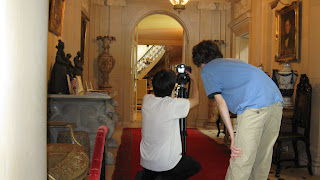 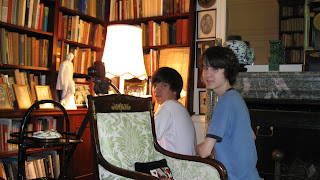 We spent the afternoon at Eileen's Bellevue Avenue mansion, shooting a few exteriors and many interiors. We will use some of this for our trailer, which will be shown publicly for the first time at the Rhode Island International Film Festival in early August and again on August 13 at the Redwood Library, which is hosting Hedgerow at the Redwood. Everyone is invited to attend both.
Here are a bust of Eileen, by celebrated sculptor Felix de Weldon, next to the grand piano in the foyer; producer/writer Wayne Miller contemplating the main library fireplace, a key symbol in the film; director Dave Bettencourt and assistant Calvin Miller shooting the entry hallway; and Dave and Cal lining up a shot in the main library. Beryl Slocum Powell was our gracious guide today, and, as always, we thank her and the entire Slocum family.
-- Wayne
Posted by G. Wayne Miller at 3:14 PM No comments: