We could not ask for more than this: A link to our site from the home page of the Rhode Island International Film Festival site. HEDGEROW will premiere as one of the main attractions at this August's festival. Thanks to our executive producer, George Marshall!
Posted by G. Wayne Miller at 12:34 PM No comments: 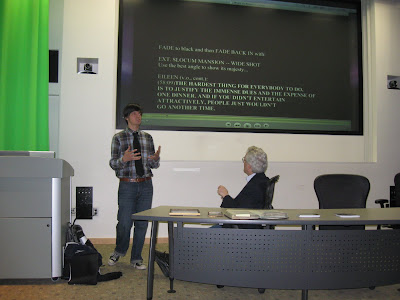 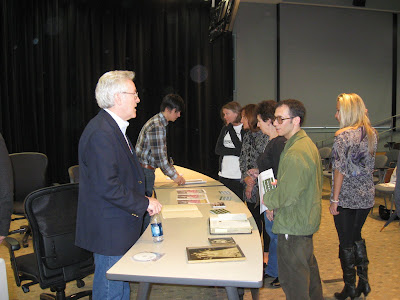 Very fine afternoon yesterday at the Roving Eye Film festival at Roger Williams University in Bristol, R.I. We screened some work-in-progress selections and discussed the making of the film -- and also received audience input into our poster. That's some of the people on hand looking at poster mockups. Also, a shot of the presentation, with a passage from the script on the screen.
Next up: a similar pre-release evening at Salve Regina University, 6 p.m. Wednesday.
Posted by G. Wayne Miller at 3:14 AM No comments: 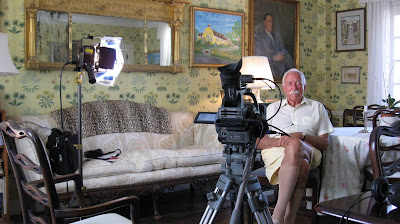 We had a burst of publicity last year when we announced we were making this movie, and this week brings a fresh round, which we expect will continue through the August premiere.
Read how the Westerly Sun's widely-circulated (in Rhode Island and Connecticut) arts and entertainment magazine, The Guide, wrote about us in its April 22 edition. It's PDF format, scroll down to Page 5. A nice photo of Eileen friend and Jackie Kennedy stepbrother Yusha Auchincloss from one of our shoots, too, which I have re posted here.
And read how we were covered on April 22 in the Providence Business News -- our Roving Eye early look and discussion on Sunday, April 25, were listed as one of 10 Things To Do This Weekend!
Posted by G. Wayne Miller at 10:47 AM No comments:

Emmy Nomination for On The Lake!

ON THE LAKE: Life and Love in a Distant Place, has been nominated for Best Documentary in the 33rd annual Boston/New England Emmy competition, sponsored by the New England chapter of the National Academy of Television Arts & Sciences. This is quite an honor for David, me and the rest of the crew who made the movie. Congratulations to all of us here at Eagle Peak Media (as we move toward completion of our second doc, BEHIND THE HEDGEROW: Eileen Slocum and the Meaning of Newport Society. Winners will be announced at a ceremony May 22 at Gillette Stadium in Foxboro, Mass.
ON THE LAKE premiered in February 2009 to critical acclaim, and has since been broadcast in PBS markets around the country. For more on ON THE LAKE, visit the movie site.
Posted by G. Wayne Miller at 6:13 AM 1 comment:

BRISTOL, R.I. –– This year’s Roving Eye documentary film festival will feature an early look at BEHIND THE HEDGEROW: Eileen Slocum and the Meaning of Newport Society, the first-ever feature-length movie about the secret world of old-money Newport that will premiere at the 2010 Rhode Island International Film Festival.
Writer/producer G. Wayne Miller and director David Bettencourt will be on hand April 25 at Roger Williams University to screen selections from the film and join RWU professor Edward Delaney to talk about the making of HEDGEROW and participate in a more general discussion, “The Art of Creative Storytelling.”
Part history, part contemporary look, HEDGEROW is told through the focus of Eileen Gillespie Slocum, Newport’s last grand dame, who died in the summer of 2008. Slocum’s family has granted the filmmakers exclusive access to her archives and private Bellevue Avenue estate, where much of the film was shot over the last year.
The Roving Eye event will be at 3 p.m. on Sunday, April 25, at Roger Williams’ Global Heritage Hall 01. It is free and open to the public.
HEDGEROW, scheduled for PBS broadcast, is now in post-production. A second advance look and discussion will be staged in Newport on Wednesday, April 28. This session is by invitation only. Those interested in attending should contact Eagle Peak Media for time, location and other details.
BEHIND THE HEDGEROW is the second title from non-profit Eagle Peak Media. ON THE LAKE, its first title, premiered in February 2009 to critical acclaim. PBS broadcasts in major national markets began in March 2009 and continue today.
For news, links to the HEDGEROW blog and Facebook page, and more, visit the Hedgerow site.
More information about Roving Eye at the festival site.
Posted by G. Wayne Miller at 8:46 AM No comments: