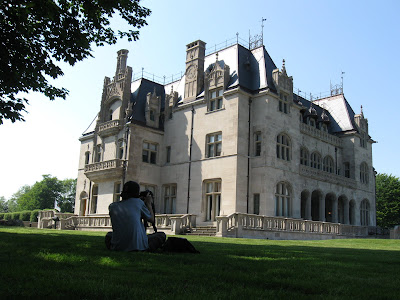 We had a crew in Newport for part of the afternoon, shooting a few more interiors at 459 Bellevue, and several exteriors, including Ochre Court, the main administration building for Salve Regina University, which has been enormously helpful to us. These are establishing shots that will find good use at the opening to the film, as we bring you past some Gilded Age landmarks into the private world of Newport Society.
This is Dave, shooting Ochre Court, which was a private mansion before the school. If you look at the chimney, you can see a sundial -- and it told the correct time!
The lighting in this is stunning, and can only be better in HD.
Thanks to Salve for their generous permission to shoot on their property.
Posted by G. Wayne Miller at 3:05 PM No comments:

PROVIDENCE, R.I. –– BEHIND THE HEDGEROW: Eileen Slocum and the Meaning of Newport Society, the exclusive and first-ever movie about the secret world of old-money aristocratic Newport, will have its world premiere as the feature event of the opening night of the 2010 FLICKERS: Rhode Island International Film Festival on Aug. 10 at Veterans Memorial Auditorium, it was announced today.

Its official Newport premiere will be Aug. 14 at Bazarsky Hall, Salve Regina University, in the City by the Sea. Both screenings will be followed by receptions –– with the Newport reception, “a Gilded Age tea party,” hosted by members of the late Eileen Gillespie Slocum’s family.

“We are honored to have these two prestigious venues to launch HEDGEROW, a documentary that provides a unique look at a one-of-a-kind woman who ruled atop a unique class at an extraordinary period of American history,” said writer/producer G. Wayne Miller.

“The screening of this special motion picture promises to be the must-attend event of the summer,” added George T. Marshall, RIIFF Executive Director and executive producer of the film. “The screening also marks the return of Flickers to its home base of Newport, where it began 29 years ago. We could not be more delighted to bring summertime viewing back to the City by the Sea.”

Part history, part contemporary look, HEDGEROW is told through the focus of Slocum, Newport’s last grand dame, who died in the summer of 2008. Slocum’s family has granted the filmmakers exclusive access to her archives and private Bellevue Avenue estate, where much of the film was shot over the last year. The film is currently in post-production.

Ticket information is available at the FLICKERS: Rhode Island International Film Festival, and at the HEDGEROW site.

BEHIND THE HEDGEROW is the second title from Eagle Peak Media, the production company founded in 2008 by Miller and Bettencourt. ON THE LAKE, its first title, premiered in February 2009 to critical acclaim. PBS broadcasts in major national markets began in March 2009 and continue today. ON THE LAKE has been nominated for an Emmy by the New England chapter of the National Academy of Television Arts & Sciences. Awards will be presented May 22 at Gillette Stadium in Foxboro, Mass., home of the New England Patriots

For news, links to the HEDGEROW blog and Facebook page, and more, visit www.BehindTheHedgerow.com