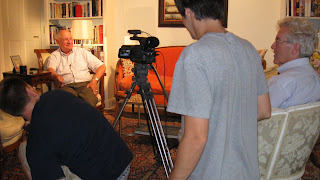 We continued through more production on Friday in Newport, shooting former Rhode Island governor and Eileen Slocum friend Bruce Sundlun in the drawing room of Eileen's estate on Bellevue Avenue. A nice shoot. Then, it was on to Nicholas Brown (pictured here in his harborside home with Josh, Dave and me) of the old-money Brown family (as in Brown University) -- a wonderful gentleman who spent three decades as a Navy officer and additonal years in public service, and now, in retirement, splits his time among Providence, Paris, and Newport, where Browns have summered since the 1800s. Nick had dead-on insights into Newport, and the world of privilege into which he was born -- both the honor and burden of being a Brown, one of America's foremost families in business, philanthropy, public service and the arts for more than two centuries. And many details about Eileen's estate and life. Eileen was Nick's distant cousin. Next shoot in Newport is Sept. 2...
Photo by Calvin Miller, associate producer.
-- Wayne
Posted by G. Wayne Miller at 7:39 AM No comments: 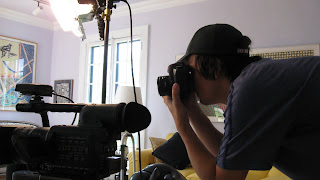 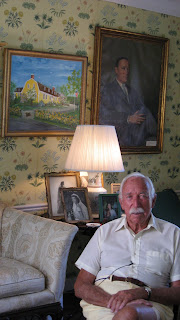 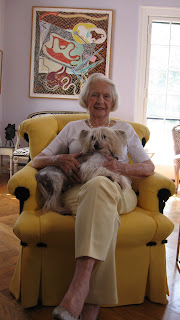 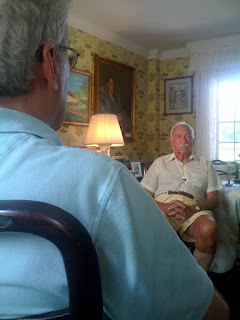 Spent the hot day Tuesday, Aug. 18, in Newport on location, shooting two of the prominent people for many years in the city: Betty "Boop" Blake and Hugh D. "Yusha" Auchincloss III, both close friends of Eileen Slocum. Betty, at age 93, rightly observed that she is likely the oldest living friend of Eileen -- they were just three months apart in age, and knew each other from toddlerhood. Both Betty and Yusha were superb.
Pictured here are: Dave on the shoot with Betty, at her estate, Indian Spring; Yusha in the dining room of his house on Hammersmith Farm, where he and Jackie Kennedy Onassis, step-siblings, lived during World War II and later (Jackie's wedding photo on table below paintings); Betty with one of her dogs after the shoot; and Yusha and Wayne (back to camera) during shooting at Hammersmith.
-- Wayne
Posted by G. Wayne Miller at 8:52 AM No comments: 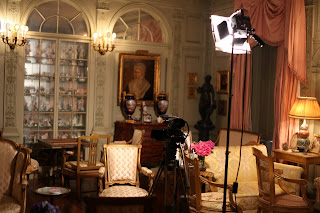 We interviewed Margy Quinn, Eileen's daughter. on camera for the first time on Aug. 13, in one of the parlors of Eileen's former home, which her children now own. Pictured here is the "set," if you will, where we rolled. Margy was exceptional on camera, as was her daughter, Sophie, who followed. Thanks to both, and to Evelyn, another of Eileen's granddaughters, who will be going on-camera in the fall.
Following the shoot, and a nice lunch in the small dining room (which brought back many memories of Eileen), we repaired to the Redwood Library, where we showed ON THE LAKE and then the teaser-trailer to HEDGEROW in two separate sessions -- about 45 people attended each, a very nice showing. Dave and I engaged in a spirited discussion period while the third member of our crew, Calvin Miller, took photos. Afterwards, an elegant dinenr at the Clambake Club, courtesy of Margy and her husband, Gene Quinn. Met some new friends and capped the evening by gazing on Newport Harbor from Bonniecrest. Our next shoot is all day in Newport this Tuesday, Aug. 18 -- including Yusha Auchincloss, an old friend of Eileen and John Slocum, and a fascinating person him self.
-- Wayne
Posted by G. Wayne Miller at 11:13 AM No comments:

Thursday, Aug. 13, 4 p.m., please join as at the Redwood Library, 50 Bellevue Avenue, Newport, R.I., for a showing of ON THE LAKE and the teaser-trailer to BEHIND THE HEDGEROW. Discussion with the filmmakers and members of Newport society and wine and cheese included. Details at the Redwood Library site.
Posted by G. Wayne Miller at 4:57 PM No comments:

NO SHATNER, BUT SHOW GOES ON

As has been reported widely this week, William Shatner at the last minute -- literally, the last minute -- canceled plans to come to Rhode Island for an appearance during an evening that includes a showing of ON THE LAKE and the teaser-trailer to BEHIND THE HEDGEROW. We were as disappointed as the folks at The Rhode Island International Film Festival, which handled the discussions with Shatner's people.
BUT the show will go on -- both OTL and the BTH trailer will be shown tonight starting with a discussion with Dave and me at 6:45 p.m. at the Columbus Theatre in Providence. Hope to see you there!
-- Wayne
Posted by G. Wayne Miller at 12:03 PM No comments: